If you have a clock powered by a Telechron rotor and it’s slow, noisy or dead here's what often happens.

- The rotor looses it's critical lubrication properties from decades of heat and oxidation.

- The lack of adequate lubrication destroys the gear wheels, shafts and bushings.

- This causes the clock to be noisy, erratic and finally gear clash stops the rotor and clock dead in it's tracks.

The solution is replacement of all worn out parts, ultrasonically clean the rotor, re-lubricate with special synthetic lubricants, seal the case and then test for torque and accuracy.

This tar like substance used to be a lightweight amber colored oil and has lost all lubricating properties and it eventually solidifies:

Gear teeth get destroyed due to increased friction: 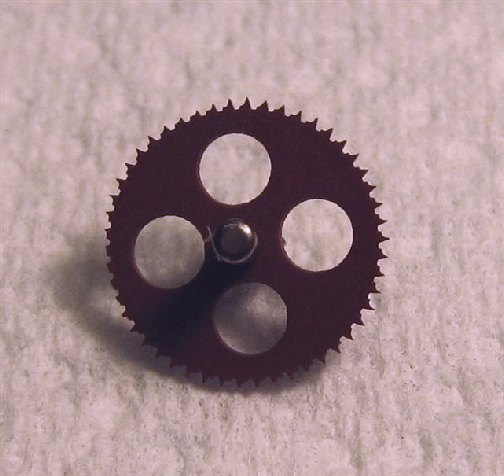 Pivots wear since there's no lubrication in the bushings:

Bushings wear into an oblong pattern which further destroys the gears:

Note: Any troubleshooting of an electric clock connected to a power source should be done by professionals  experienced in electrical repairs. Insulation is likely to be decayed and voltages can be lethal.

- This can be the result of a movement in need of repair/service and/or a rotor that needs repair.  It takes a good rotor and a well maintained clock movement for trouble free operation. The two components work as a team to provide accurate timekeeping.

- The first step is to separate the motor from the clock movement and see if the rotor resumes accurate speed when separated from the clock.  Rotors are all marked with the RPM spec. Mark an index mark on the rotor's shaft and time it.  Check it's synchronization with a known good clock. (this is easy with 1 RPM rotors)

- You can also place your thumb and forefinger on a rotor's pinion gear or shaft and apply slight pressure to simulate a load.  (like you're holding a pencil).  You should not be able to stall out a 1 RPM or 3.6 RPM with light pressure. (Note: Never try and turn a rotor’s shaft.  It’ll likely damage the internal gear train.)

- You can also take a small screwdriver tip and give the first gear in the clock's movement a spin.  This gear should feel nearly frictionless. (ie the first gear the rotor contacts)  If there's any resistance then the clock is likely in need of cleaning, lubrication or repair.

2. Clock does not run

- This can be electrical connection, coil, rotor or movement. Inspect all electrical connections up to the coil and use an ohmeter to measure for continuity.  Most coils are in the range of 600 to 1000 ohms.  Coils also get slightly warm, are magnetic to the tip of a screwdriver and create a slight hum.  Coils either work or they don't.  If they don't the problem is likely the connection to the cord.  It's extremely rare that a Telechron coil burns out.

- If the coil tests good then separate the motor from the clock movement. If the rotor doesn't turn then it's the problem.  Most motor problems are the rotor and rarely the coil.

- If the motor turns when separated from the clock movement but stalls when installed in the clock then the clock's movement is likely in need of service.

3. The clock is noisy

- If the noise is a slight 60 Hz hum then it could be a loose coil or coil mount.  Some clock cases amplify sound like a loudspeaker.

- If the sound is more like gears rubbing or even a screeching sound then it's almost always a rotor in need of service.

- Sometimes a sound can even be generated by the second hand of the clock touching the inside of the glass.  This can generate a very high frequency sound.

4. The clock stalls out

- This can also be movement and/or rotor. Remove the motor and see if it resumes to normal operation.

- Even if a rotor runs fine without a load it can lack the torque to power a clock.  Clock movements and the rotors should be serviced periodically for long life.

5. The clock only runs in certain positions

- First of all, rotors are designed to operate in the horizontal position. If a rotor is sitting pinion side up then oil could be accumulating in the tail.  The tail has small armature disks that turn at 3600 RPM but have very little torque.  Any contact with oil can result in slow or stalled out operation.  Test your clock in it's normal running  position.  (ex: wall clocks shouldn't be tested laying flat on a bench)

- The only scenario I know of for a clock that runs fast is that the wrong rotor is used.  (ex: 50 Hz rotor being used with 60 Hz power source)

- Sometime the hands of a clock can be loose and create symptoms that look like the clock is running fast. Worn gears in the clock’s movement can also create this effect where the movement's gears can move the hands "uphill" but they slip going "downhill".